As part of the Office 365 Configuration and migration project, we’ve had to define and create an alternate upn (UserPrincipalName) suffix for an internal Active Directory domain that is not publicly routable. Updating the upn for every user in the Active Directory Domain could be a tedious task if done manually. Following is a screen shot of a user object upn before the script run: 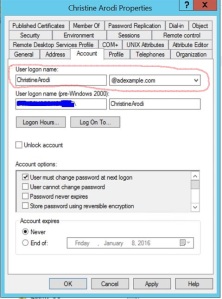 To quickly and efficiently accomplish this task while avoiding unnecessary errors, I wrote a short PowerShell function "update-upnsuffix" to make the updates by OU (Organizational Unit):

The first line of the script uses the Get-ADForest cmdlet to extract the first element of the upnsuffixes collection property and assigns it to the $newupn string variable. 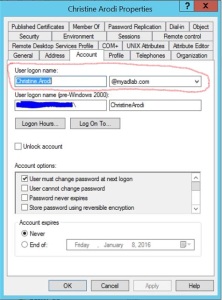 The script could be adapted to any Active Directory environment.